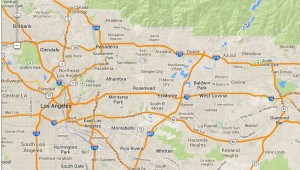 The “Other” Valley – the San Gabriel Valley

“Where in the hell is the valley?”

As the unofficial historian and self-proclaimed expert on all things Southern California, I completely understand the confusion.  The problem for those without tans and agents is there are so many valleys.  Too many.

There is The Valley (which we covered last week), the Antelope Valley, the Ojai Valley, the Santa Clarita Valley, Simi Valley, Death Valley; even Orange County claims to have a valley – the Santa Ana Valley, just to name a few.  Hell, even some guy named Victor has a Valley.

“But L.A. is just one big desert that steals all our water, isn’t it?  How can you possibly have so many valleys?” whine my friends from Northern California.  Guilty as charged.  We’re just making them up.  But remember, if you cut off the water, then no more Duck Dynasty or Dancing With The Stars.  Have I made myself clear?

This week we will discuss the granddaddy of all the valleys, the San Gabriel Valley.  The history of this area officially begins once the Spaniards drove the Native Americans out with their fancy ideas and newfangled diseases.  They started the very first Rose Parade, using the flowers that the fleeing Originals left behind.  Nothing existed before the Spaniards came.  Just like the Mayflower.

The San Gabriel Valley is located northeast of downtown Los Angeles and is separated from the San Fernando Valley by the Crescenta Valley.  How can a valley be separated from a valley by a valley?  Because countless municipalities lay claim to the name “valley” to try and suckle from the lucrative endorsement deals that come to valleys.

A lot of people don’t realize that at the turn of the 20th Century, the entire area of the San Gabriel Valley used to be parking lots and gigantic malls that were, in fact, invented by Leonardo DaVinci over 500 years ago.  Not a home in sight.  From Pasadena all the way past Azuza, nothing but concrete.

Around that time, people from all over Southern California would take the electric trolley out to cities like Pasadena, Bradbury, Covina, even the breakaway rebel West Covina, to hang out at the malls and convenience stores, smoke, and buy beer for the poor, underage kids from the Westside, which at the time was considered Hollywood.

Entire families would ride the rails in shiny Red Cars to shop from such fine San Gabriel Valley establishments as Carriages R Us, AM/PM Bales of Hay, and the 3-Day Fedora Warehouse.  Imagine, a comprehensive mass transportation system designed for everyone to take them anywhere.

But with the arrival of Ford and all of his oil buddies came the demise of the popular Red Line, and the San Gabriel Valley was cut off.  Concrete gave way to rural sprawl, and with it, miles and miles of hideous and unseemly avocado and orange orchards that sprouted like weeds through the mulch of asphalt and faded glory.  Big ol’ honkin’ houses with large grandparent-style yards dominated the area for decades, and a way of life for Angelinos was gone forever.

Thankfully, years later the urban sprawl, and with it the modern strip mall as we know it today, returned to the Other Valley save for the one little pocket of big houses and pieces of orchards that Skeeter Bradbury bought, renamed after himself, and preserved as a monument to how far we have come.