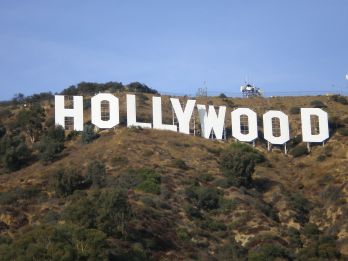 I was working on a commercial on the grounds of CAA’s World Headquarters, marveling at how many stories of glass and concrete a small group of people could afford who make their living off the work of others, when the first A.D. yelled, “That’s lunch! One hour!”

I queued up to the catering truck, eagerly anticipating whatever culinary treats good old Aengus had in store for the crew, when a guy in a suit horned into the line right behind me and started up a conversation like we knew each other. I played along, since he wasn’t cutting in front of me.   He kept referring to me as, “Babe.”

At one point the topic of writing came up, and I mentioned that, even though I’m just the sound guy, I did have a few scripts in a top desk drawer, and before I knew it, we had inked a three-picture deal with A-list celebs attached. While he dribbled sauce from the Asian pork roast all over his Satya Paul necktie, he proceeded to secure me huge back-end points and a subsequent sequel first-look arrangement. 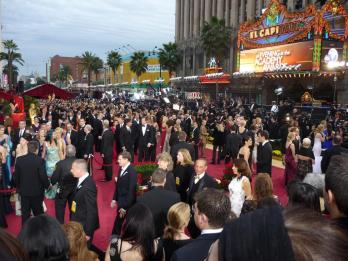 By the time he started wolfing down some bourbon-infused, Kentucky bread pudding, he had lost two of his A-list clients. A young guy in a better suit showed up and unceremoniously shoved a cardboard box at him that contained all of his possessions from his “old” corner office, and muttered something along the lines of, “Get outta here, grey hair,” and then some tough guy tailors repossessed his Stuart Hughes suit on the spot.

He walked away in just his boxers and socks, but not before he grabbed a handful of plastic forks and a fistful of cheesecake and tossed them in the cardboard box. He was drunk, wacked out on painkillers, and in rehab by the time he reached the corner.

I watched him as he pulled a pre-paid cell phone out of his sock like a back-up Derringer, then boarded a city bus while plotting both his revenge and his comeback. The doors closed and he was gone in a cloud of natural gas clean exhaust.

As the A.D. shouted, “And we are back!” I noticed something flashy on the ground. It was my momentary agent’s gold embossed CAA security pass on a llama-thread lanyard. I picked it up and tucked it away as a souvenir of my brief, meteoric rise to the top, and the subsequent fall from grace – all during lunch. If we had only taken a half-hour break, I don’t think I would have had this opportunity.

It’s okay, though. I like the smaller agencies anyway. Fewer people to ignore my calls.

This article first appeared in HumorOutcasts.com

One thought on “The Speed Of Hollywood”