I’m going to let you in on a little Show Biz secret about food commercials. All the food has to be real.

“Well, how come my El Diablo McBurger doesn’t look anything like the one on the commercial?” you may ask, while catsup drops right onto the crotch of your pants, instead of onto the gauzy white blouse of a busty super model.

Because there is an entire department whose sole job it is to make that food look great. That means, though they have to use the actual food listed as ingredients, they can take a couple of prep days to find the very best looking burger patty, isolate the most consummate piece of lettuce, slice a million flawless tomatoes until the most focus-group verified width occurs, inject the burger in just the right spot with the famous overflowing splooges of Secret Sauce…

If it took that long, and that many people, to make your burger, it would cost $350,000. Which is, coincidentally, the cost of the commercial.

So if you’re a fast food franchise famous for “the crazy chickens,” and your hook is that they are flame broiled to perfection, you need to keep throwing chickens on the fire until you get the perfect assortment of exquisitely grilled chicken that is exactly the right color, sizzling the perfect amount, and is releasing clear fluids at the rate that is extremely appetizing instead of gross.

And that is just for take one.

Many hundreds of chickens are cooked over the course of a shoot day. Which also means that Production is constantly trying to fop off discarded chicken on the crew. “More chicken dip to go with those chicken chips?”  “Here, have a chicken sandwich with chicken instead of bread.” “Chicken smoothie? C’mon, it’s good!”

I think it is appropriate at this time to pay tribute to the thousands of chickens who valiantly gave their lives for the Chicken That Is Loco ad campaign. These intrepid cluckers courageously and unflinchingly flung themselves in front of the butcher, and ultimately onto the grill, for the sole purpose of serving the greater good, proving once again that the needs of the many outweigh the needs of the few, or the one, chicken.

I remember working on a potato chip commercial many years ago, whose name rhymes with jingles. We were going to be shooting outdoors in a historic L.A. plaza. That meant that the Food Prep people had to get there early to select the perfect “Jingles” chips, so that they could perfectly slide out of the tube container, into a perfect row of perfectly unbroken perfect chips.

Long before dawn, Food Prep, with the help of the Art Department, was at the plaza to painstakingly open hundreds of cans of, oh hell let’s just say it, Pringles, in order to find the perfect chips in each one. Because the spot was going to require many, many cans of Pringles to be opened, they had to put the perfect chips somewhere. A table wouldn’t do.

Blankets and sheets were spread out all over the plaza, in order to hold the delicately and deliberately placed chips. Later, after a team of  “Creatives” from the Ad Agency and the Client, in all seriousness, assessed the perfectness of of each and every chip, only then would they be meticulously stacked, and delicately inserted into the containers, to be opened during filming.

So picture the square, with blankets and sheets spread out all over it, covered by literally thousands of Pringles laid out side by side, waiting for their chance at commercial fame. Did I mention it was a public plaza?

I saw it happen in slow motion.  Across the plaza, a couple of dogs just out for a fun time stroll, poked their heads in the entrance to the square. You could see the thought process happening, even from that far away. 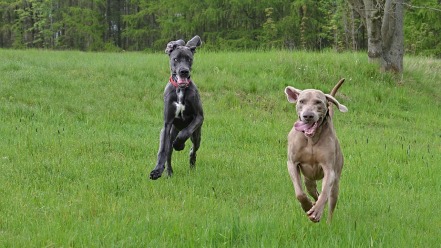 The two dogs, already celebrating their good fortune, start running for the blankets of perfect chips. They looked like a dog food commercial of happy dogs running in slow motion, their beautiful coats glistening and undulating, their eyes getting bigger as they ran, their mouths flinging spittle in all directions.

Meanwhile, around the perimeter of the chip square, Food Prep and Art Department people turn in even slower motion, and realize the horror of what is happening. The deep, gargled, low frequency, slow motion screams of people who had been working since five in the morning could be heard as far away as Long Beach.

The dogs went right for the center of the perfect chip assembly. The crew was running at them from all sides, desperately trying to head off disaster while not stepping on any perfect chips, which can’t be done.

Dogs are faster than people.

It was sort of an explosion of blankets, Pringles fragments, and the concussive shattering of the hopes, dreams, and hard work of dozens of sleep-deprived crew people, whose defeated faces could gradually be seen through the settling chip dust that is only 42% potato. Oops, did I give away a secret?

We lost thousands of perfect Pringles on that warm summer day. Our perfect schedule was set back by six not so perfect hours. Several people quit Show Biz to go back to jobs with cubicles. But the check cleared, and I was left with a lasting memory that comes back every single time I see a Pringles tube.