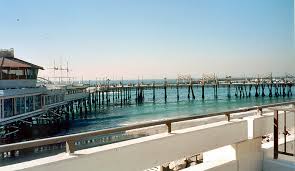 As the Unofficial Chronicler of all things Southern California, I recently had the pleasure of spending a day at the Redondo Beach Pier, or the Land That Time Forgot.

Let’s get some business out of the way. The Redondo Beach Pier is conveniently located in Redondo Beach, and by the ocean. Coincidence? I think not.

To enter the pier, you first must pass under a giant flying saucer-like police station building overseeing everything on the pier in a distinctly alien invasion/Big Brother sort of way. Apparently, there might be a small crime factor in the excitement of visiting the pier.

Once past the eye in the sky surveillance, the fun begins. Visitors stroll hand-in-hand past the shirtless, hairy and tan day drinkers who dominate any of the multiple bar patios, delight in safely avoiding the crazy sweaty lady who insists on jumping out at people, warning them to “watch out for my seagulls…SCREEEEECH!” and marvel at the many opportunities to eat deep-fried anything.

The Pier dates back to the 1800’s, and has the distinction of being the largest endless pier on the California Coast. By “endless pier” I think they mean that either you can walk out on one section of pier and come back on another different section, or the pier has been endlessly burned and rebuilt, destroyed by storms and rebuilt, and gone in and out of bankruptcy, since the freakin’ Gold Rush. At some point you’ve got to wonder, “Is this the right location?” 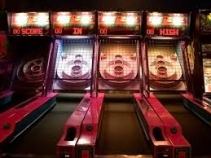 If you blur your eyes, you can be transported back to another era.  You know, the one with funnel cakes and cotton candy, skee-ball and magic machines that could figure out your weight, and kids in horizontally striped shirts and baseball caps who would run up and down the pier yelling, “Jeepers!” and “Holy cow!” and “Golly gosh, Mr. Erickson that sure is a swell hat!”

A halcyon time, when dogs could rescue kids who had fallen into wells with just a few barks and wags of the tails.  “What’s that Lassie?  Timmy’s caught in a well?  Again?  Okay, what are the coordinates, and what kind of heavy equipment will we need…good girl!”  We had a lot more wells back then.  So many so that kids were falling into them right and left.  Really, it was a tragic situation.

It was an innocent world where smoking was good for you, and drinking martinis – as in more than one – after a hard day’s work, or just to calm down those pregnancy nerves, was socially acceptable.  A time when neighbors were friendly and offered a wave from across the street, unless they thought you were a Communist, in which case they turned you in to the House Un-American Activities Committee, and you were never heard from again.

The good old days, when you could be sitting on the endless pier watching the sunset, making out with your best girl, and suddenly the air raid sirens would sound and you would wonder,  “Is this it?  Is this the nuclear attack we’ve all been waiting for?  Let’s run inside the Mini Chinese Food stand so we can duck and cover.”

Come to think of it, I’ll take the pier today, with it’s rotting timber charm, aggressive seagulls, and that intoxicating smell of the battered shrimp hitting the hot oil. Besides, there’s nothing like that first 10am beer to make you take your shirt off.

This article first appeared on HumorOutcasts.com

4 thoughts on “The Pier That Time Forgot”